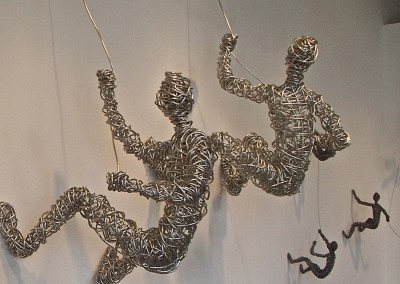 Mason’s career began as a muralist and faux-finisher. Adept at trompe-l’oeil and neo-classical landscape, his work appears in some of the finest homes.

In 1999 Mason embarked on an exploration of the U.S. eventually settling in California. It was at this time that he began working more extensively with wire, a medium he had previously used only as armature.

“I’ve always found the human form to be the most compelling subject to render in any medium. The action of climbing provides and opportunity to look at the figure suspended in space, to be able to see from angles less seen in most traditional sculpture.”