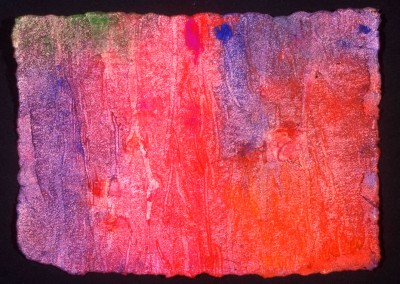 Elena Osterwalder’s new work is experimental and consists of naturally dyed paper and organic dyes. The dyes are made from plants (indigo, turmeric, tea), insects (cochinille)and vegetables (beets, onions. Minerals (clay and mica) are mixed into the dyes to give them texture.

The process of dyeing is similar to the one used by Pre-Hispanic natives to dye their wool, silk and cotton and is still in use in Mexico today.

Elena says, “My objective is to fuse old methods used by artisan with contemporary thought processes, by making installations of very natural and environmentally safe elements. The fusion of the two cultures – American and Hispanic – has been present throughout my work. It is always apparent either in subject matter or below the surface of my abstract paintings where a tropical color, flower or a sensuous line reminds me of my homeland.”

Elena Osterwalder is showing her work in two international shows during September 2010:

“City Scene” and “The Tower” are exhibited at Dreams-Vision-Creations Athens Art 2010, Technopolis, Athens, Greece through September 15. The event has been organized by Takis Alexiou and CA4S.